Thanks to Travel and Training support from the Arts Council of Ireland, I was able to attend the Prague Quadrennial earlier this June. PQ is the world’s largest exhibition of design for performance that takes place in Prague every four years. In 2007 Ireland was represented officially for the first time, and as Exhibition Coordinator, I was lucky enough to get to go, also for the first time. 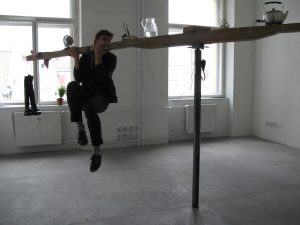 A lot has changed in the intervening 12 years. The big, beautiful Výstaviště Palace, which was used as the exhibition space up to 2007, was badly damaged in a fire the following year. This forced the PQ to stretch across multiple venues in 2011, and even more so this year – insinuating itself into the daily life of the city centre for a couple of weeks. The tone of the exhibition has changed too. There is less of the stall-to-stall ‘best of’ of each country’s design, as national curators now tend towards focusing on specific designers or companies, or stand-alone (kinda) artistic installations – with very mixed results. This one by a Latvian designer was one of my favourites. 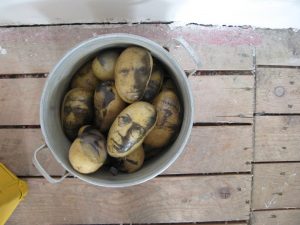 Detail from the Russian exhibit

Then again, I’ve always had an ambivalent feeling about the exhibition. I think it partly comes from how unevenly curated it can be – each country having a hugely varied capacity and budget for their exhibit. Each year I’ve come with high hopes and am often struck by the amount of work I really dislike, or consider bad design. It takes me a long time to root out things that I connect with aesthetically, and often that truffle hunt feels like too much effort. The exhibition is huge, and just navigating the city centre Prague mid-June tourist hordes is exhausting. That said, I know no other opportunity like it to see such a breadth of international design work, so I really shouldn’t grumble.

This year, for the first time, I signed up for two day-long workshops at DAMU, the Theatre faculty at the Academy of Performing Arts – partly to meet people at what can be a lonely event where you sometimes feel everyone else is having more fun that you. In one, a group of us spent a day building a giant two-storey Rube Goldberg machine, and in the other we worked with UK artist James Leadbitter aka the vacuum cleaner to design our ideal asylum, as part of his Madlove project. Highly recommended. Nothing like playing with ideas to cheer you up. 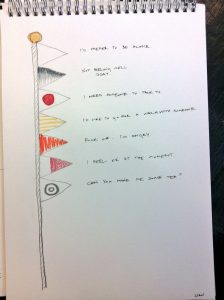 In March this year I got to work with junk ensemble again for the first time since Drinking Dust. Another manky disused space transformed into something a little magical, if I do say so myself.

They were reprising Sometimes We Break, a performance they had originally made for the (much cleaner) Tate Britain in 2012. The original version had been designed by Jo Timmins, and made for family audiences – they asked me to take elements of her design and work with them to re-construct the piece in a (literally and figuratively) darker space. We had the use of two connected warehouses on Barrow Street in Dublin, and the performance was part of Mind Your Step, a walking tour-type season of Irish contemporary dance.

Some before and afters:

We had two days to clear the warehouses, install all technical and design elements, and to tech the 20 minute performance. Sarah Jane Shiels managed to light the place beautifully. But all thanks are due to the stalwart Mags Mulvey (our stage manager) and her team, who spent a full day moving all the disgusting junk from the two warehouses into one corner in a bid to make something aesthetically pleasing/not harmful.

Most of my work focused on the set up of five doll house in diorama-type environments: 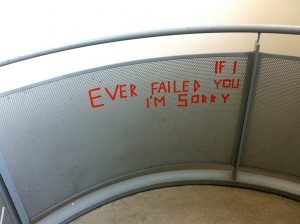 When Veronica Dyas asked me to help her put together an installation/performance this May called Here & Now that would be the cumulative event in a project she had been working on for the last few years, I wondered what I could bring to it.

She didn’t need a designer – she knew what she wanted in the space. She didn’t need a producer – she had one on board, and knew that I don’t consider myself a show producer anyway. She didn’t need a director or an outside eye – it wasn’t really that kind of thing. I wasn’t sure what benefit I could be to her, but I have a lot of respect for Veronica, so said I’d help in what way I could. We agreed to meet once a week.

Veronica had what seemed like an enormous satellite team of excellent people contributing work in response to her and her thoughts. Among the people I didn’t meet, who she’d met originally on her Camino walk and were now collaborating remotely, she was working with:

We talked, and I started to see what I could do for her. What I didn’t expect was that working with Veronica would do just as much, if not more, for me. Her practice of encouraging everyone to be in their dream – doing the thing they most want to do – created a feeling of connection, togetherness and calm over the whole event, for participants and audience alike. Everyone was welcome into the space she created. Everyone was at home.

Having the opportunity to be involved in the collaborative practice that Veronica led reminded me of why I got involved in working in the arts in the first place. Her creative openness and dogged optimism combined with a endless reservoir of integrity has encouraged me to keep interrogating my own ideas and plans to make sure they ring true. Thanks Veronica for reminding me of the feeling of long-distance walking, and how it’s worth the effort to bring that frame of mind into everyday life. 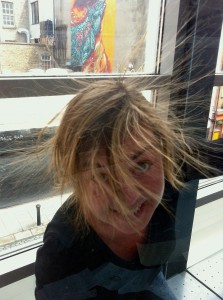