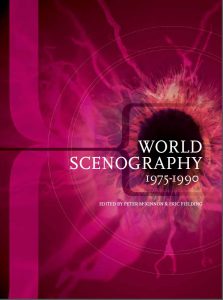 Some years ago I was hired by Irish Theatre Institute to research Irish design for performance as part of the Irish contribution to World Scenography 1975-1990, a publication commissioned by OISTAT, the International Organisation of Scenographers, Theatre Architects and Technicians. The book is now published and available to buy online.

World Scenography 1975-1990 is the first volume in a new series of books looking at significant stage design throughout the world since 1975. This volume, documenting 1975-1990, has been about four years in the making and has had contributions from hundreds of people in more than 70 countries. Despite this range of input, it is not possible for it to be encyclopædic, much as the editors would like. Neither is the series a collection of “greatest hits,” despite the presence of many of the greatest designs of the period being examined. Instead, the object is to present designs that made a difference, designs that mattered, designs of influence; to document for posterity a collection of the significant theatrical set, costume, and lighting designs from the period.